NEW AND NOTEWORTHY
This year’s crop of freshman shows were a little thin in the impressive department. I found myself reaching to extended and premium cable more than ever to get my TV ya-yas, while thanking the television gods that the sophomore seasons of my favorite network shows (Community, Modern Family, Glee) continued to perform admirably. Here I’ve assembled those few newbies that earned a permanent spot on my series recording list.
Archer – There’s nothing I can add that the briefest bits of dialogue don’t already demonstrate why this raunchy yet witty animated spy spoof series with the best comedic voice cast assembled on television (particularly lead H. Jon Benjamin and Arrested Development alums Jessica Walter and Judy Greer) should be on everyone’s Must Watch list.

Raising Hope – First to admit my status as a comedy snob, I’ve set a standard that shows must impress within three episodes or I don’t invest in a season pass. The sole new network series I’ve included in my favorites fold took exactly that long to win me over. A surprise considering the pedigree of co-starring legend Cloris Leachman, but even though the pilot had some amusing bits, the pieces of the whole didn’t click together instantaneously. That changed with the episode “Dream Hoarders,” which brilliantly combined the hapless yet heartwarming aspects of the show and its characters, and throwing in a little something wacky with the sight of Cloris Leachman’s MawMaw becoming a Jenga savant when hearing They Might Be Giant’s “Istanbul (Not Constantinople).” 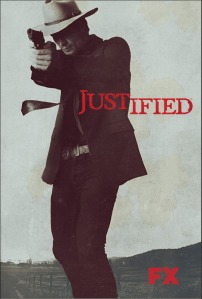 Justified – No, I’m in no way employed by FOX Broadcasting Company or related to Rupert Murdoch. Usually I’m the harshest critic on series coming from Uncle Rupie thanks to inane cancellations of great series (Arrested Development, Wonderfalls, Firefly…the list goes on), but this past year they’ve really impressed me thanks mostly to little brother FX which continued its commitment to out of the box programming. In Justified we’re treated with the classic archetypes of renegade cop and prodigal son wrapped up in lead character Raylan Givings, plus stories dripping in crime noir from the mind of author Elmore Leonard. I also confess that my country roots make me a sucker for shows set in the south. Plus Timothy Olyphant really pulls off that gun and cowboy hat combo (see also, Deadwood). Whatever the case, it can’t be denied that a strong lead and well-executed storytelling are at the heart of Justified and worthy of dedicated viewership.
Vodpod videos no longer available.

Honorable Mention: Terriers (RIP) – I really believed FX would give this phenomenal PI series a second season, considering it fit well with the anti-hero niche the extended cable network had started to corner. Alas, ’twas not in the cards for Terriers as it struggled all 13 episodes to gain a decent-sized audience and it’s pretty easy to put my finger on why – the head-scratching title and obscure marketing choices. I’m all for avoiding the too-obvious route in storytelling, letting viewers discover a little on their own rather than hitting them over the head with exposition, but when it comes to enticing an audience to start watching there’s got to be some explanation to a show’s premise prior to its premiere episode. Those who took a chance and did tune in to the pilot were not disappointed. Surprisingly, but thankfully, the creators were given a heads up by the network to prepare for cancellation, so there’s a good sense of closure in this neatly packaged 1-season series that I highly recommend picking up on DVD when available. 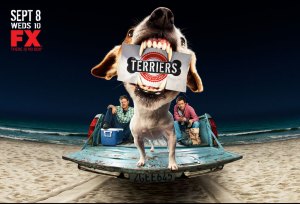 Not being one for cops & robbers TV – yes, I’ll admit with it being on the air 2/3 of my life I have been guilty of catching an episode or two of Law & Order and its many iterations, no one can completely resist the strange yet awesome combo of Ice-T, Richard Belzer AND Chris Meloni – the one spin on the crime genre that’s always intriguing is the focus on down and out, possibly shady but ultimately good guy PI stories. This very kind of series has recently surfaced on FX, the network that has truly cornered the market on anti-hero tales (see Sons of Anarchy, The Shield, Nip/Tuck, Justified), and its name is Terriers.

Huh? Isn’t that the TLC show about a kennel for designer dogs? Obscure title aside, after viewing the pilot I immediately wanted more and every episode of this SoCal detective series that’s followed has delivered on its fine first hour. 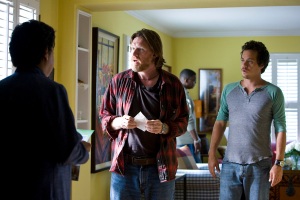 Coming from the mind who created The Shield, Shawn Ryan, and the wordsmith of the Ocean’s 11 remake, Ted Griffin, Terriers is such a perfect mixture of self-contained cases and over-arching mystery that this fan sees strong resemblances to gone-before-its-time fave Veronica Mars since it includes conspiracies and corrupt, wealthy locals in a seemingly idyllic beachside community (sans the high school setting). While not starring a spunky, pixieish blonde  it does have an excellent lead pairing in stars Donal Logue and Michael Raymond-James as the two intrepid private investigator heroes who, despite not being officially licensed, take cases that continually put them in harm’s way (or police custody), don’t always pay off big and usually involve beefier men highly trained in the art of pummeling. Basically the kind of situations that create great drama, action and quite a lot of comedy.

With a rather lackluster crop of new shows on the big five networks’ fall schedule, Terriers is a welcome breath of fresh air, another noteworthy notch in FX’s impressive belt of series and has the privilege of receiving a coveted “series recording” space on this TV aficionado’s overtaxed DVR queue. In other words, it’s one to watch – FX, Wednesdays at 10/9c.

Being only half-way through the 13-episode run, it’s easy to play catch-up thanks to the interwebs. Let this excellent promo whet your viewing appetite. 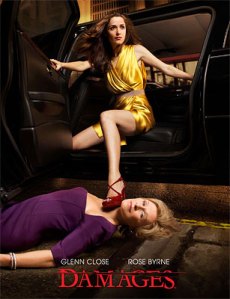 Hot casting news from contributor, and fellow TV fanatic, Jackie Boy: Critic and awards-darling Damages is about to get a dose of comedy, kinda. Coming into its third season, the FX drama will welcome veteran comic actors Martin Short and Lily Tomlin as series regular and guest star, respectively. The plot will pit Emmy-winner Glenn Close’s Patty Hewes against a family led by Tomlin, her son (played by Campbell Scott) and their high-powered attorney (Short).

Short seems a left-field choice to join the tense legal thriller, but the show has previously used another actor known mostly for comedy, Ted Danson, to embody one of the best TV villains of recent years.

Production of the show’s 13-episode season three is set to begin tomorrow in New York City for a January premiere on FX.

This week brings the beginning of Fall ’09 premieres and it looks like The CW has won the coin toss (second and last sports metaphor – primetime game telecasts, particularly of the series variety, are not by friend as they interfere too often with new episodes) and will officially kick off (seriously, no more) the season. Tonight’s premieres include their visions of ’90s primetime soap classics and on cable, FX offers up the return of some bad boy biker action.

EVERYTHING OLD IS NEW AGAIN

With the wildly successful reboot of 90210 last year, it only seemed fitting that The CW would repurpose the original 90210 spin-off, Melrose Place. Set in the same drama-filled LA apartment complex as its predecessor (complete with courtyard pool so everyone has a good seat for the inevitable water-logged catfight), this Melrose remake promises to be more scintillating; we know this because one of the main characters starts out the series as a call-girl, unlike becoming one a few seasons in to keep up with a nasty drug habit a la original series bad girl Sydney Andrews (Laura Leighton) – Scandalous!

Sydney won’t be the only character returning for more slapfests and sexytime, others from the quintessential ’90s version will be on board either in a Jennie Garth’s Kelly “I work at my old high school, so that’s why I belong here now” Taylor way, or as a guest star like Shannen Doherty’s Brenda “I’m visiting my old friend/rival/nemesis/almost-sister-in-law for awhile” Walsh. In the former category is Thomas Calabro, whose lacivious doctor Michael Mancini will now be playing the role of father to one of the new debaucherous denizens. More seem to be of the special guest variety including Josie Bisset (Michael’s ex-wife Jane), Daphne Zuniga bringing back her “hardened” NYC photographer Jo Reynolds, and the biggest buzz is if the show will be able to lock in a guest return for Heather Locklear’s bed-hopping ad exec, and she who made Melrose such a hit, Amanda.

Being of the generation that made Melrose such a pop culture phenomenon, I’ve set the DVR to record the new pilot out of curiosity but have not yet committed to putting it on my “create series recording”  list. The main reservation being an un-enthused reaction to the first episodes of last year’s 90210 still fresh in my mind. Advanced news places more praise on the new MP, consistently citing it better than the 90210 pilot, and as I’m always willing to offer something new a fair chance The CW will be given the opportunity  to change its current losing streak it has with me.

EVERYONE LOVES A BAD BOY

On the completely opposite end of the dial is FX’s actioner Sons of Anarchy. For those who may have missed the first season (of which I’m included – not through lack of interest, but out of space on the DVR and time to commit to another 1-hour series) the latest “there is no box” drama from the cabler takes a Hamlet-esque story – a young man who’s recently deceased father may have been taken out by underhanded means has various problems with a scheming “uncle,” devious mother and former lover/conscience back in his life – and mixes it with the dirty, criminal dealings of a gun-running, Northern California biker gang. Impeccably cast with intriguing characters, I question my foolish choice to not commit to this show’s freshman year as it fits so well in the best of FX’s top-notch dramas (Rescue Me, Damages, The Shield).